It is almost considered normal that women will suffer from a low sexual appetite at some point, yet that’s not the case with men. After all, men are only interested in one thing – or at least that’s what many people think. Which is why, sadly, men who suffer from sexual apathy and who completely lose interest in sex are seen as not really fitting the mould. Yet it’s more common than you might think, with roughly 16 per cent of all men in total suffering from a lack of sexual desire.

What is meant by sexual appetite anyway?

When we talk about interest in sex or sexual appetite, we mean sex drive, sexual motivation and desire for sex. Our sex drive is controlled by our hormones. If the level of male sex hormones increases, arousal increases with it. A man’s fantasies will then often run wild as well. In addition to sex drive, sexual motivation – the psychological component of desire – also plays a role in whether or not a man is interested in sex. The third component is sexual desire. It is only when these three components occur together that men also have an appetite for sex. Sexual apathy amongst men can therefore have various different causes.

Causes of a lack of sexual desire in men

Generally speaking, the issue of sexual apathy in men is discussed far less than that of sexual apathy in women. One of the reasons for this is that there are not as many possible physical or hormonal causes in men. According to one statistic, just 10 per cent of men under the age of 40 suffer from a hormone deficiency or physical condition and, far too often, the issue of sexual anorexia in men gets lost amidst problems such as erectile dysfunction and premature ejaculation. Of course, premature ejaculation or erectile dysfunction can also be responsible for a man’s reduced interest in sex. It is frustrating, particularly when men have been suffering for a long time, and it usually has a negative impact on a man’s sexual relationship with his partner.

In many cases, however, sexual apathy is triggered instead by men feeling low on energy in their everyday lives. A demanding job, a hobby that takes up a lot of time and energy, and family life – many men end up completely burnt out. Especially since, these days, men are under much more pressure to perform than in the past. After all, women now stand shoulder-to-shoulder with men, and men often have to prove themselves to their own partners too. Sexual anorexia in men is usually a complex problem, however, with a number of different causes all at play. 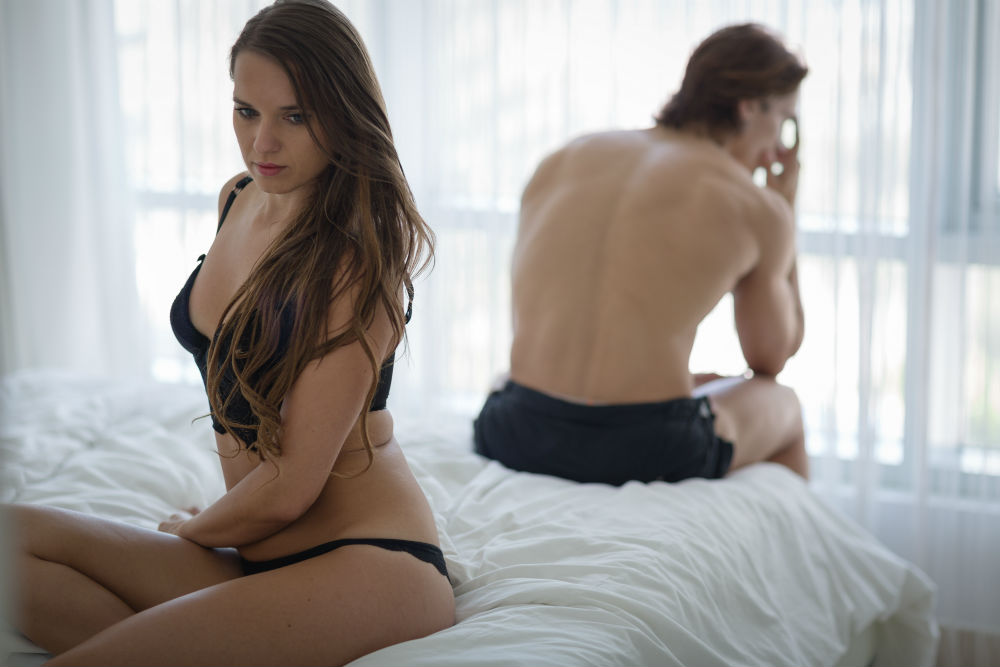 These causes may have a physical, psychological or even social basis. Physical causes can include the sexual dysfunctions mentioned above. Another factor is that testosterone levels start to drop once a man reaches the age of 35. There are also men who suffer from hormone disorders or chronic conditions that can cause a lack of sexual desire. In addition, medication taken for depression or for liver and kidney conditions can also be at the root of sexual anorexia in men. Drug and alcohol consumption can also result in sexual anorexia. Whatever the case, it is important to consult a doctor. And not just in these scenarios, too, as a doctor’s advice can also be helpful where there is no physical cause.

It goes without saying that psychological – and social – causes differ from one man to the next. Crucial factors may be a man demanding too much of himself, sexual dissatisfaction or relationship problems. At the same time, however, unfulfilled sexual desires can be another reason why men lose interest in sex. The pressure and stress already discussed can cause sexual apathy in men as well. And of course, mental health problems such as depression, psychosis and anxiety disorders can also be factors that make it difficult for men to take an interest in sex. Sexual anorexia can also be brought on by long-term unemployment or problems at work.

Generally speaking, younger men are more likely to be affected by psychological or social factors, whereas physical conditions are an increasing factor in older men.

Help for men with a lack of sexual desire

To be able to treat a lack of sexual desire in men, it is vital to recognise the cause or causes. Self-reflection is important, as is talking within the relationship. Is there something he is not getting from the relationship, perhaps? Is he putting too much pressure on himself, or are there problems at work? It is important for men to ask themselves these questions and scrutinise their own life situation. Women often blame themselves when their partners lose interest in sex. They think their partner is no longer interested in them. Yet usually, that isn’t the case. That’s why men should always talk to their partners and perhaps try to work out together why the man has lost his sexual desire. If there is a physical reason, a doctor will be able to help. Some men may also find it easier to confide in a stranger initially – preferably a doctor. A doctor should usually be able to get to the bottom of what is causing his sexual apathy.

No man should have to suffer from sexual apathy. Especially since it can also lead to relationships breaking down. Facing the problem is the first step towards finding a solution. And there are plenty of things you can do to rekindle male sexual desire!